How to View 8mm Film without Projector

Home|Film|How to View 8mm Film without Projector
Previous Next

How to View 8mm Film without Projector

In 1965 Super 8mm film was introduced as an improvement to Regular 8. It did not need to be flipped in the camera, had a superior image and some could be recorded with sound! It remained popular until the 1970s when the Video Cassette Recorder was introduced with the Betamax and Video Home System (VHS) formats.

Decades have passed since 8mm films became obsolete, but the information and memories stored there are still important to their owners. The best movies, weddings, birthdays, and family get-togethers are often stored in these films and remain treasured for their valued memories.

Can 8mm Film Be Viewed Without Projector?

The best way to watch these films is with an 8mm film projector. However, if you do not have one, you do not have to worry. Besides, every time you use a projector on the 8mm, it gets a little damage in scratches, meaning a shorter life span with every use. Technology is available to help you enjoy these films with the same quality the projector would offer.

Convert the Video Film into a Digital Version

Converting the film into its digital version is the best way to enjoy the video content. Today’s conversion services will make the video look good as new regardless of how old it is. The advanced scanning technology will give you High Definition resolution with no bleeding or distortion. You can watch it on larger flat-screen televisions, tablets or your phone making the family memories that much more enjoyable.

Moreover, the 8mm films are rather fragile and it is only a matter of time before they are lost forever. This can be avoided, especially for dynamic, one-time event films like weddings or baby showers. You will be able to upload the digital versions to the cloud if you so wish or any storage media where it will last for decades to come.

A professional lab will assist you if you suspect your tapes are damaged or need re-splicing. Attempting to view them in their condition may cause more serious damage. Your film must be clear of any debris, dust, and residue and should not have any cracks, bends or mold.

If it feels brittle or smells like vinegar, get assistance from a professional. They will advise you on how to use specialized equipment to salvage as much footage as possible without causing any more damage. The film should also have enough white tape leader so that it goes through the machine properly. 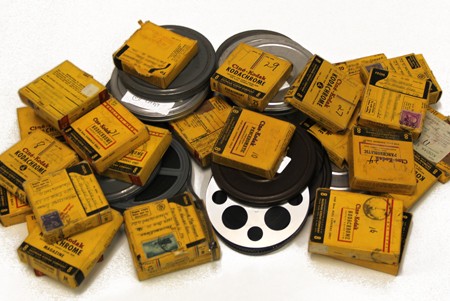 How Can I View 8mm Film Without A Projector?

To view an 8mm without a projector:

Get a Vintage Film Editor
When they stumble upon a stack of old 8mm films in their basement, most people are curious about what is on them. A preview is a great way to determine whether they are worth the digitization costs and hassle.

You can get a preview of what is on your 8mm with a vintage editor. These devices were in style back when people wanted to edit their films. They look like mini projectors with two arms for you to place your reels on. The film will go in through one end and out the other. You will then crank the machine by hand as it gets illuminated by a small bulb on the screen.

Compared to projectors, vintage film editors are gentler on your films. If the editor is well-maintained, clean, and in excellent working condition, it may work even better than a projector.

High-Powered Magnifiers
Film is recorded as a series of pictures. You can see the pictures if you look closely holding it in front of a light source. You can use a magnifying glass to take a closer look at the films you have just discovered. Carefully pull out the reel beyond the leader (white starter tape section) and then observe the first few footage frames to determine whether you recognize what is on it.
It is a more low-cost method requiring a magnifying glass of up to 10x to get a greater close-up. However, the frames are quite small, and the better method for getting a preview would be the editor idea above. To get the best results, look for a magnifying glass with in-built lighting.

Can I convert this film to DVD or MP4?

Yes, professional conversion services use machinery that corrects the differences between film and video so that the 8mm will play well and look normal. They clean off the dust then transform into a digital form before correcting contrast, brightness, and other distortions using specialized software.

The digital file is then transferred into High Definition file that can be viewed on your TV, computer, tablet, or phone. DVD copies can also be made for playing on a standard DVD player or computer. Contact us today for more information.